The History of the corsage, Pugh’s Flowers Memphis 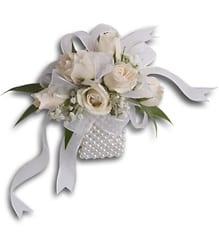 A corsage originally referred to the
bodice of a woman’s dress. Since a bouquet of flowers was often worn in the
center of the bodice, the flowers took on the name “corsage.” Our modern sense
of the corsage comes from the French “bouquet de corsage,” meaning “a bouquet of
the bodice.” Although the placement of the flowers might have changed, the name
stuck and is still used to refer to any small bouquet of flowers worn on the
body.

Corsages are made from a small bunch of
flowers or a single bloom. The corsage was originally worn at the waist or the
bodice of a dress. Later, it became common to pin flowers to the shoulder or on
a handbag. Corsages today may even be tied around a wrist, neck, ankle or worn
in the hair.
Origins
The wearing of a corsage at weddings dates
to the time of the ancient Greeks, who believed that the fragrances of flowers
and herbs warded off evil spirits. Not only the bride but other females at the
wedding held flower bouquets or attached them to their clothing.

It is common to give a corsage to the
mothers and grandmothers of the bride and groom. Smaller corsages may also be
given to godmothers or other females who are important to the participants. A
corsage is traditionally worn on the left, since it is closest to the heart.

In the 20th century, it became common for
escorts to present their dates with corsages, particularly for formal dances and
proms. As women’s dresses have changed to styles with spaghetti straps or no
straps, it has become more common for women to wear the flowers on the
wrist.

Anna Jarvis spearheaded the development of
an annual Mother’s Day celebration in 1907. Since her mother’s favorite flower
was the carnation, it has become traditional to wear a carnation corsage on that
day. According to FlowershopNetwork.com, florists promoted and made popular the
custom of wearing a red carnation if one’s mother was living, and a white
carnation if one’s mother had passed away.
Pughs Flowers2016-11-05T09:13:34+00:00April 23rd, 2012|Florist Memphis Tennessee, Pugh's Flowers, Uncategorized|Comments Off on The History of the corsage, Pugh’s Flowers Memphis