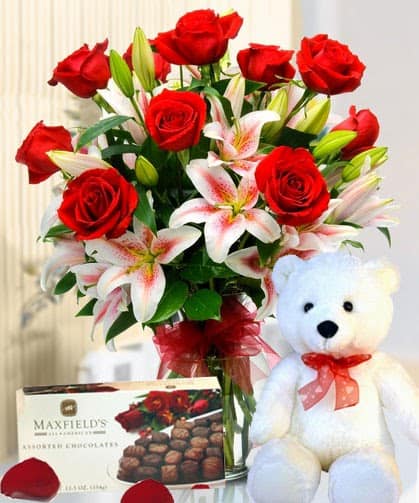 How did flowers and lace join Valentine’s Day?

Most of the items linked to Valentine’s Day came from old-fashioned
customs that used lace handkerchiefs and floral bouquets to pass on
non-verbal messages.

When the custom went out of style for everyday use, the original
meaning was lost and eventually they became part of the Valentine’s Day
tradition.

Giving flowers dates back to the 1700s when Charles II of Sweden
introduced the Persian custom of “the language of flowers” to Europe.
Books about the meanings of particular flowers were published, and
entire conversations could be carried out using only a bouquet of
flowers.

The rose has become the traditional Valentine’s Day flower. As it
has always been a popular flower, the meaning of the red rose is still
well known as the flower of passion and love. The red rose is also the
favorite flower of Venus, the goddess of love, which helped give the
rose its symbolic meaning.

Lace
Centuries ago, a woman would drop her handkerchief in front of the man
she liked. This was a form of encouragement to him, and if he picked it
up for her an introduction could be made. Lace has always been part of
women’s handkerchiefs, and it has since been linked to romance.

Cupid
He is the winged child whose arrows are shot into the hearts of
potential lovers. His victims are supposed to fall deeply in love with
someone. In both Greek and Roman mythology Cupid is the son of the
goddess of love and is always part of celebration of love and lovers.

The heart
The heart is linked to Valentine’s Day because it was once considered
the source of all human emotions. The custom of drawing a heart shape
is believed to come from early attempts to draw an organ no one had ever
seen. The symbol progressed to become known as a sign of love.

Why does an X mean a kiss?
In the Middle Ages, a lot of people couldn’t read or write. When they
had to sign a document, they would make an X in place of their name. In
front of witnesses the signer would kiss the X to show themselves
trustworthy. The kiss has since come to be represented by an X.

It’s for the birds:
Lovebirds are often part of Valentine’s Day. Found in Africa, these
brightly colored birds sit very close together with their mates, earning
them their name.

Doves are also part of the tradition. They are symbols of love and
loyalty because they mate for life. A pair of doves will also share the
care of all their babies.

Love knots
A love knot is a symbol of everlasting love, because its winding loops
have no beginnings or ends. In times past, they were made of ribbon or
drawn on paper to prove ones undying love.